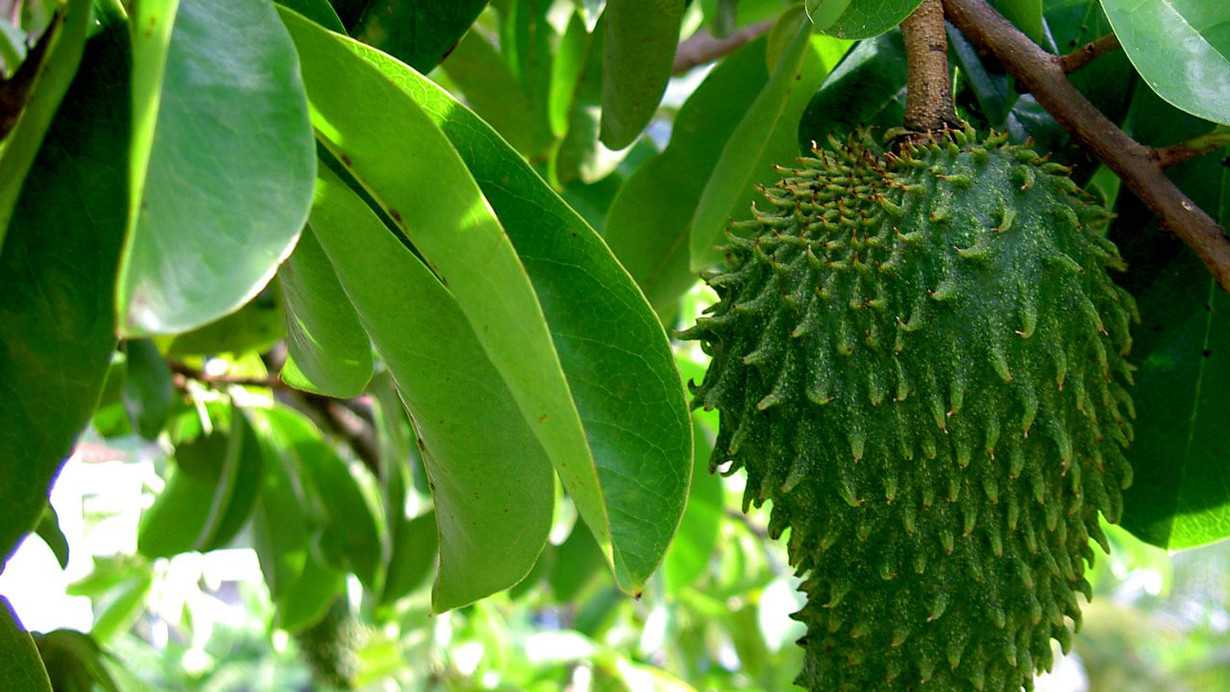 Whether it is an academically studied drug or a strange natural remedy, I’m always on the lookout for something that can help a patient (or reader) and in the process expand my knowledge about sleep. One such remedy is soursop. Ask individuals living in the Caribbean what their secret is for a good night’s sleep, you’ll often get the answer, “soursop.”

It turns out that guyabano (Annona muricata) is a fruit mainly grown in tropical climates. It has many other names, including guanábana, graviola, anona, and sirsak. As a member of the Annona genus of flowering plants, its most recognizable relative for Americans is the pawpaw. Soursop is a strange-looking fruit; imagine a Granny Smith apple crossed with a pineapple… on steroids. This should give you a mental image of the spiky fruit, which can weigh up to 15 pounds. Cutting open the green rind reveals a white pulp with a consistency similar to that of cooked fish, and rows of dark, inedible seeds.

Lay writings about soursop as a sleep aid are easy to find. In the West Indies, guyabano leaves and guyabano seeds are commonly used as a sedative. In the Netherlands Antilles, the leaves are brewed to make a beverage that enhances sleep. The leaves can also be put into one’s pillowcase to enhance sleep.

Even though edible fruits are an important part of a healthy diet, at least one has caused an atypical form of Parkinson’s disease when over consumed on the islands of Guadeloupe, Guam and New Caledonia, as well as the Afro-Caribbean and Indian population in London 1. This is based on epidemiology, or evidence of epidemics in real people (in vivo). Recently, Martinique has been added to this list 2.

The fruit that caused it and continues to do so grows on a tree called soursop in English, graviola in Portuguese, guanábana in Spanish and Laxmanphal in India. Even though graviola is the Brazilian Portuguese word for A. muricata, this word has become quite popular in English. Moreover, the top five the most frequently searched herbs in 2008 in the Memorial Sloan-Kettering Cancer Center (MSKCC) “AboutHerbs” web site include graviola and not soursop 3. Its scientific name is Annona muricata. The fruits are used to make both a juice and a nectar that are quite popular in Puerto Rico in the USA, Mexico, Brazil, Malaysia, China, India and other many other countries. However, the public has been misled and misinformed.

There are many more websites, magazine articles and even at least one book that claim that graviola can prevent or cure cancer. So, some people may succumb to this atypical form of Parkinson’s disease when they think they are preventing or curing cancer. This is sad because there are many clinically tested and FDA-approved treatments and cures for many types of cancer. Moreover, a person (especially a child) could increase their risk of getting atypical parkinsonism by taking a dietary supplement that is not only ineffective, but can have serious harmful side effects. The goal of this article is to explain how the misinformation about the alleged anticancer effects happened and why people (especially children) should not over consume fruits from the graviola tree or other trees in the same botanical family (Annonaceae).

Graviola and other fruits in the Annonaceae family contain a class of neurotoxins called acetogenins 4. These neurotoxins are also present in other fruits in this family, including the North American pawpaw (Asimina triloba) 5. However, many articles have been published that describe the anticancer effects that are seen in cells grown in laboratories (in vitro). Unfortunately, extracts of both graviola and the pawpaw are widely available as dietary supplements 6. They are marketed as being able to kill cancer cells, but supposedly do not affect healthy cells, such as neurons in the brain 7. Unfortunately, one book stated that “Medicine only works as a palliative.

Native to tropical America, the soursop is tolerant of poor soil and prefers lowland areas at 0–1200m altitude.