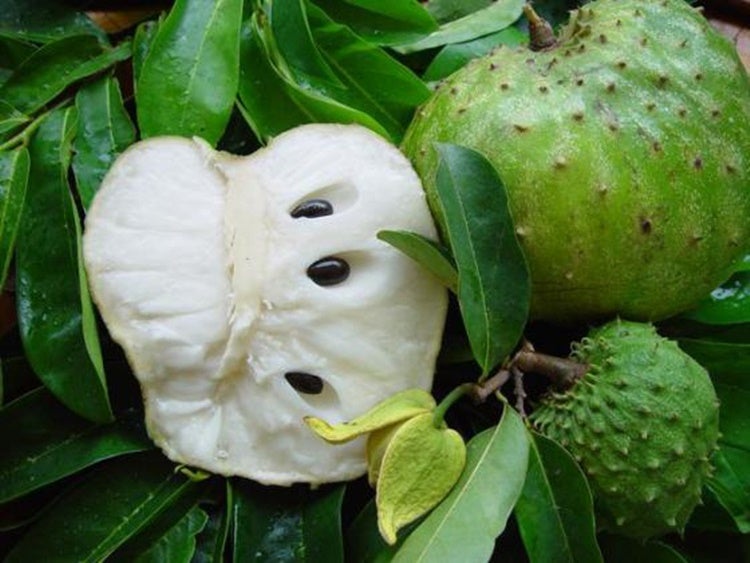 Annona muricata or guyabano fruits is a species of the genus Annona of the custard apple tree family, Annonaceae, which has edible fruit. The fruit is usually called soursop due to its slightly acidic taste when ripe. Annona muricata is native to the Caribbean and Central America but is now widely cultivated – and in some areas, becoming invasive – in tropical and subtropical climates throughout the world.

Among the healthy fruits, one that is widely known for its excellent benefits is the guyabano fruits. In English, it is called as soursop. Some people also refer to this fruit as graviola.

green fruit has a creamy texture and a strong flavor that is often compared to pineapple or strawberry.

Soursop is typically eaten raw by cutting the fruit in half and scooping out the flesh. Fruits range in size and can be quite large, so it may be best to divide it into a few portions.

A typical serving of this fruit is low in calories yet high in several nutrients like fiber and vitamin C. A 3.5-ounce (100-gram) serving of raw soursop contains:

Interestingly, many parts of the fruit are used medicinally, including the leaves, fruit and stems. It is also used in cooking and can even be applied to the skin.

Research has also unearthed a variety of health benefits for guyabano in recent years.

Some test-tube and animal studies have even found that it may help with everything from alleviating inflammation to slowing cancer growth.

Fruits for the factory are placed in a bodega under ordinary room temperature and allowed to ripen with firmness until they are ready for processing/preservation.

On the otherhand, ripe fruits may be held 2 or 3 days longer in refrigerator, but the skin blacken and become unsightly. However, the flesh and flavor are not affected.

Preservation/utilization of fruits has been getting widespread attention not only on its increasing acceptability in the food market but also because of its potential as a means of generating an export. The various preservation of guyabano was briefly described in the following procedures.

Guyabano Juice – after washing sound ripe fruits, they are blanched for 3-4 minutes in boiling water. They are cooled in water, peeled and their inner core removed. They are cut into 5 cm square pieces. One cup water is added to 1 cup fruit heated at 800C for 3 minutes or until the fruit is soft enough to squeeze of the juice. The juice is pressed through a muslin bag while hot. The juice from the residue is extracted for the second time with the same amount of water. The two extracts are mixed and sugar is added to taste. The juice is poured into jars and exhausted before sealing to 820C (approximately 15 minutes from boiling time). The jar is sealed immediately, sterilized in boiling water for 10 minutes, cooled and stored.

Guyabano Preserve – mature but firm fruit is peeled sliced about 1 cm thick using stainless steel knife, and soaked in water. It is blanched in boiling water for 5 minutes cooked in syrup (2 parts sugar and 1 part water), and soaked in syrup overnight. It is again boiled for 30 minutes until thick, drained and packed in preserving jar. The jar is filled up with syrup, half-sealed, sterilized for 25 minutes in boiling water and sealed completely.

Guyabano Candy – mature but firm fruits peeled sliced to about 1 cm thick with a stainless steel knife, and soaked at once in water to avoid discoloration. It is cooked in syrup (2 parts sugar to 1 part water) for 10 minutes and soaked in syrup for 1 week, boiling it daily for 5 minutes. It is cooked over a slow fire until syrup becomes sugary. It is removed from fire, separated from sugar, cooled and wrapped individually in cellophane.

Guyabano Jam – the fully ripe, sound fruit is peeled and its seeds are removed. To every cup of fruit, an equal amount of sugar is added and the mixture is cooked to jam consistency. It is poured while hot in a preserving jar. After removing the bubbles, the jar is half-sealed, sterilized for 25 minutes in boiling water and sealed completely.

Frozen Guyabano Pulp – the sound ripe fruit is peeled and its seeds are removed. To every cup of fruits are added ¼ cup refined sugar and 2 tbsp. calamansi juice. The mixture is packed in a plastic bag container and stored in a freezer (240F). To serve as juice, enough cold water and sugar are added to taste.

Guyabano Jelly – thoroughly ripe fruit is rinsed and sliced, retaining the skin and seeds. It is put in a pan with enough water to cover, and boiled until soft, with constant stirring. It is removed from the fire and passed through a double cheesecloth. The extract is returned to the fire, boiled until all the scrum has risen, and strained again. To each cup, 1 tbsp. calamansi juice is added and the mixture is boiled again. To the boiling juice is added 1 cup hot dissolved sugar and the mixture is boiled until it hardens on spoon removing all rising scrum in the process.

Guyabano Juice Concentrate – fully ripe, sound fruits are thoroughly washed with detergent and carefully rinsed in water. They are cut into halves and the skin and seeds are removed. Two cups of water are added to 1 pulp, the mixture is blended to facilitate juice extraction, and strained through a muslin cloth bag. The clear juice is concentrated juice is “cut back” to 160C Brix by adding freshly prepared juice. Ascorbic acid equivalent to 50 mg/cc is added during pasteurization to retard normal oxidation browning in storage. Fortified concentrate is pasteurized at 850C for 5 minutes, hot filled into previously sterilized cans, sealed completely and processed into boiling water for 10 minutes. Cans are immediately cooled in running water and wiped dry.